‘You know all those studies about brain activity? The ones that reveal thought patterns and feelings as a person performs a task? There’s a problem: The measurement they’re based on is inaccurate, according to a study out of Duke University that is rocking the field.

Functional MRI machines (fMRIs) are excellent at determining the brain structures involved in a task. For example, a study asking 50 people to count or remember names while undergoing an fMRI scan would accurately identify which parts of the brain are active during the task.

The trouble is that when the same person is asked to do the same tasks weeks or months apart, the results vary wildly. This is likely because fMRIs don’t actually measure brain activity directly: They measure blood flow to regions of the brain, which is used as a proxy for brain activity because neurons in those regions are presumably more active. Blood flow levels, apparently, change….’

Why Were Blade Runner, The Thing Failures in 1982 But Are Considered Masterpieces Today?

‘Blade Runner and The Thing are considered masterpieces of American cinema. But on June 25, 1982, they debuted as critical and box office failures….’ 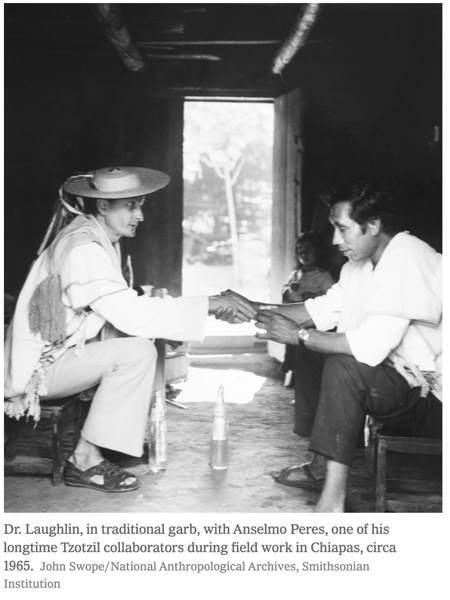 Preserver of a Mayan Language Dies at 85:

‘Robert M. Laughlin, an anthropologist and linguist whose extensive work in the state of Chiapas in southern Mexico documented and helped revitalize Mayan languages and culture, died on May 28 in Alexandria, Va. He was 85. His son, Reese, said the cause was the new coronavirus.

Dr. Laughlin spent much of his professional life doing field work in Chiapas, beginning in the late 1950s. He learned the Tzotzil (also spelled Tsotsil) language as a graduate student with the Harvard Chiapas Project, a long-term ethnographic field study that had just been started by Professor Evon Vogt and was focusing on the town of Zinacantán. After years of painstaking work, in 1975 Dr. Laughlin published The Great Tzotzil Dictionary of San Lorenzo Zinacantán, with 30,000 entries.

Indigenous languages in the region — there are many — had been under siege since the Spanish conquest, and Dr. Laughlin’s dictionary helped spur a revival of interest in them. The dictionary, published by the Smithsonian Institution in Washington, where Dr. Laughlin was curator of Mesoamerican ethnology, was not simply a compilation of which Tzotzil word equals which English word. It was a deep dive into word origins, how the language had mutated and more….’

Studying anthropology as an undergraduate in the early 1970s, I was privileged to be a participant in Vogt’s Chiapas Project, doing fieldwork living with a family of Tzotzil speakers in Zinacantan. In preparation for my time in Chiapas, I studied the language with the benefit of Laughlin’s dictionary and expertise and knew him a little. The Chiapas Project had a ranch outside San Cristobal de las Casas where the fieldworkers would convene on the weekends with Vogt and other ethnographic luminaries like Laughlin. My field research in Chiapas turned into my undergraduate thesis and I can still speak a little Tzotzil, although my interests soon turned away from social anthropology.