‘…[A] team of researchers has assembled the most comprehensive genomic map on dogs to date. The results were published in the journal Cell Reports. Researchers gathered blood samples or mouth scrapings from 1,346 dogs, of 161 breeds, over the course of 20 years. The dogs came from Europe, North America, Africa, and Asia.Turns out, dogs were bred into certain types or “clades.” There are 23 in all. As humans migrated to different places, dogs went with them, even into the Americas across the Bering Strait. Today, all the dogs that we know of in North America originated in Europe. The European breeds superseded the original ones or interbred with them….’ 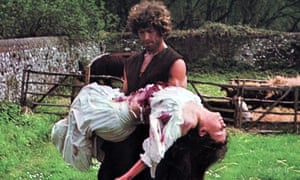 ‘From Kill List to Blood on Satan’s Claw, celebrate May Day with a journey into the dark heart of the English countryside…’

‘He’s been the deciding justice in every gay rights case. Now it looks as though he may retire — taking the possibilities of further progress with him…’

‘Temperatures are rising faster in the Arctic than anywhere else in the world, giving green vegetation a stronger foothold in the typically icy region. While a greener Arctic could help suck some excess carbon dioxide out of the atmosphere, dark vegetation also absorbs more sunlight, which could help to speed up global warming. You might think all that extra vegetation would at least be a good thing for plant-munching animals like caribou, which need to eat up to 12 pounds of grass and other plants every day, but a new study suggests a greener Arctic is bad for caribou as well…’

Washington Post: Trump made 488 false or misleading claims in his first 100 days in office

‘When Donald Trump’s casino business went bankrupt in 2009, a lawyer whose clients stood to lose more than a billion dollars told police and the FBI that he got a menacing phone call from a man with a thick New York accent who threatened his family.“My name is Carmine. I don’t know why you’re fucking with Mr. Trump but if you keep fucking with Mr. Trump, we know where you live and we’re going to your house for your wife and kids,” the caller said, according to the account that the attorney, Kristopher Hansen, gave to the Holmdel police department in New Jersey. Hansen speculated that the caller was Trump’s bodyguard.

According to FBI case notes, the phone call to Hansen was made at 2:05 p.m. on Feb. 18, 2009, from a New York City telephone booth located across the street from the Ed Sullivan Theater, where Trump was a guest that day on The Late Show With David Letterman.’

‘CBS News’ John Dickerson interviewed President Trump in the Oval Office and pressed him on his claims that President Obama surveilled him, to which Trump said he doesn’t “stand by anything” and that “you can take it the way you want” before walking away.’

Evan Osnos: ‘The Constitution offers two main paths for removing a President from office. How feasible are they?’