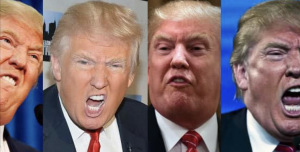 ‘The AP has released the transcript of its Friday interview with our Yam-in-Chief, and much of it is utterly unintelligible.That’s not just my personal assessment, either. In 16 instances, the AP’s transcribers found that they were unable to discern what the fuck it was that Trump was saying. Webster’s defines “unintelligible” as “impossible to understand.” My theory isn’t so much that the recording was inaudible so much as that it didn’t make a lick of sense.I’m warning you now that there’s a whole lot of text down here, but I’m sparing you the 55 instances of ellipses, in which he trailed off because he doesn’t know what he’s talking about.

Webster’s defines “unintelligible” as “impossible to understand.” My theory isn’t so much that the recording was inaudible so much as that it didn’t make a lick of sense.I’m warning you now that there’s a whole lot of text down here, but I’m sparing you the 55 instances of ellipses, in which he trailed off because he doesn’t know what he’s talking about.

I’m warning you now that there’s a whole lot of text down here, but I’m sparing you the 55 instances of ellipses, in which he trailed off because he doesn’t know what he’s talking about.’ (Jezebel)

‘It does not take more than a few pages for journalists Jon Allen and Amie Parnes (right) to arrive at what amounts to their thesis in Shattered: Inside Hillary Clinton’s Doomed 2016 Campaign, a new tell-all book built off years of reporting on the trail.

“[Clinton’s] campaign was an unholy mess, fraught with tangled lines of authority, petty jealousies, distorted priorities, and no sense of greater purpose. No one was in charge, and no one had figured out how to make the campaign about something bigger than Hillary,” Allen and Parnes write in the book’s introduction. “[But] no explanation of defeat can begin with anything other than the core problem of Hillary’s campaign — Hillary herself.”

Writing in a lively and fast-paced narrative, Allen and Parnes use their unparalleled access (more than 100 on-background interviews with top Clinton surrogates) to richly document what it felt like to be aboard the Clinton Hindenburg, as well as to argue that Trump’s victory was not inevitable, or the result of interventions from the FBI or Russia, but the result of campaign incoherence that went all the way to the top…’ (Vox)

‘America dropped twice the tonnage of bombs on Laos, Cambodia, and Vietnam as it dropped during the entire Second World War. There was so much ordnance dropped that it altered the landscape. In his book Kill Anything That Moves, the author Nick Turse quotes the ecologist Arthur Westing as writing during a wartime visit to Vietnam, “Never were we out of sight of the endless panorama of craters.” So many defoliants were dropped from American planes that between 1945 and 1980 forest cover in Vietnam declined by half. There are 78 million unexploded bombs currently still littering the landscape of Laos. And despite the overkill, America lost the war. Bombing, even with “creative” weapons like Agent Orange and Napalm, simply didn’t work. As Nick Turse writes, “Overkill was suppose to solve all American problems, and the answer to any setback was just more overkill.”

The precision bombing technologies developed during the 70’s and more recent drone technologies were supposed to be the end of overkill. From now on, America would only kill bad guys, quickly and efficiently. But technology isn’t perfect, as our recent bombing of Syria has shown. Innocent people are always killed in wars, no matter the steps taken to mitigate it. So bombing remains as counterproductive as ever. As Institute for Policy Studies Middle East expert Phyllis Bennis said in an interview, “You can’t bomb terrorism out of existence.” You can destroy buildings and kill people, and perhaps you’ll kill a terrorist in the process, but that’s not a strategy to win wars or end terrorism. Rather, it only causes “more terrorism, antagonism, and violence.” …’