As a psychiatrist, I’m finding it really difficult to bite my tongue and avoid doing pronouncements about Trump’s evident (and considerable) psychopathology. But there is an ethical mandate in my profession to avoid armchair diagnosis when one has no treatment relationship with someone and has not examined them face-to-face. So I think I’ll just continue to call him names instead.

Fascinating thinking by Matt Yglesias (Vox). He notes that, while complaining about media coverage is nothing new from a political campaign, Trump goes further with “a wholesale, broad-brush effort to entirely discredit the entire existing media ecosystem… Trump’s thesis is not that reporters are out of touch with the struggles of ordinary Americans or implicitly biased in favor of liberals. He argues instead that the whole enterprise is root and branch untrustworthy…” and that scapegoating the media will be the explanation for the faithful about why he lost the election (as he surely will). This will be his route to rehabilitating his unflattering image with the wider universe of conservatives who feel he has blown what should have been a very winnable race for the GOP.

“And the media is in many ways a perfect scapegoat, because it sets up Trump for a next act… Trump is likely setting himself up as a media entrepreneur.”

The CEO of his campaign, Steve Bannon, used to run Breitbart.com, where he has shown savvy in building a digital conservative brand. Combine that with the “on-camera talent” of Trump himself, as a reality TV host, and his friend Sean Hannity (thought to be considering a departure from Fox News). Add into the mix Roger Ailes, who built the Fox juggernaut before his recent ouster for sexual harassment; and Trump’s so-in-law Jared Kushner, who owns the New York Observer. Looks like the right mix to “operate a successful media company, folding the existing Breitbart and Hannity franchises together with the Trump brand to form Trump TV or Trump Media.” But this would only work if this blowhard with a pathological inability to take responsibility for any of his failings can successfully overcome the stink of a loser, A “campaign to scapegoat the establishment press for Trump’s electoral defeat makes the perfect exit strategy.”

‘At a rally in West Palm Beach, Florida, Donald Trump fired back against the accusations from women that he had sexually assaulted them. He said the New York Times story claiming he had assaulted a woman on an airplane was a “totally fabricated and false story.”

He seemed to imply that a People magazine reporter who accused him of kissing her against her will wasn’t attractive enough: “Take a look. You look at her. Look at her words. You tell me what you think. I don’t think so.” 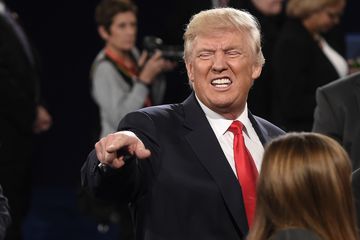 He said he was preparing a lawsuit against the New York Times, saying reporters “collaborate and conspire directly with the Clinton campaign.”

And Trump’s rants didn’t stop there. He attacked Hillary Clinton, saying she should be “locked up”; accused the “Clinton machine” of engaging in a historically unprecedented cover-up; and said Clinton “meets in secret with international banks to plot the destruction of US sovereignty.”

‘Two-thirds of Republican senators are still supporting Trump, as are an even higher proportion of House of Representatives members and a majority of GOP governors.The RNC under Reince Priebus is still enthusiastically supporting Trump, despite some rumors to the contrary. The GOP’s top House and Senate leaders — including Paul Ryan — are still endorsing Trump, despite Ryan saying he won’t campaign with Trump or defend him (which he already wasn’t doing).

Several top conservative evangelical leaders are still backing Trump. And many top 2020 Republican contenders, including Sens. Ted Cruz, Marco Rubio, and Tom Cotton, haven’t renounced Trump, some more reluctantly than others. All this remains true even after Trump’s leaked tape scandal. There has all along been a larger than usual group of prominent party members who were refusing to back Trump (including the Bush family, Mitt Romney, John Kasich, and a few senators and governors).That group did get a little bigger this weekend, most notably through the addition of Sen. John McCain. But then it got a little smaller, when Fischer and Thune got cold feet. And all along, it was very clearly a minority in Republican politics. Overall, the dam is still holding.

All this remains true even after Trump’s leaked tape scandal. There has all along been a larger than usual group of prominent party members who were refusing to back Trump (including the Bush family, Mitt Romney, John Kasich, and a few senators and governors).That group did get a little bigger this weekend, most notably through the addition of Sen. John McCain. But then it got a little smaller, when Fischer and Thune got cold feet. And all along, it was very clearly a minority in Republican politics. Overall, the dam is still holding…’