‘One of the world’s foremost experts on the subject of flying saucers doesn’t believe in alien abduction, little green men, or government cover-ups one bit. Instead, author and saucer aficionado Jack Womack is interested in the people who believe that they’ve seen UFOs. He’s so fascinated by these true believers, in fact, that he’s collected nearly every single book — some of which there were only handful of copies printed — by authors who claim to have seen flying saucers.

“I can study TB without catching it, preferably, and I can be a student of the Bible without being a Christian,” Womack says, explaining his intense interest in these claims without actually believing any of them. “I collected these books because they gave me the same kind of escapism kicks other people get from reading science fiction, or my friends get from writing it.” …’

‘The pangolin is the only known mammal with scales. Pangolins are beautiful, precious little creatures, often likened to an artichoke with legs. According to NPR, they’re also the world’s most trafficked mammals. Luckily for these little cuties, the Convention on International Trade in Endangered Species, or CITES, has officially banned commercial trading of pangolins…’ 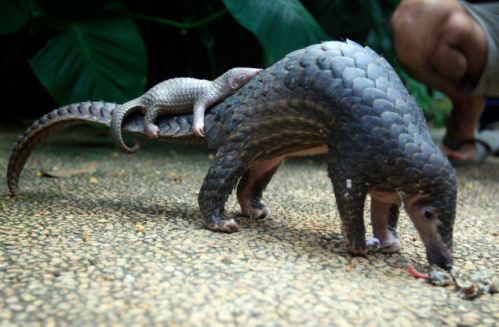 ‘The journal Neurology published a unique and touching paper today: it’s by artist Susan Schneider Williams, the widow of actor Robin Williams, who died by suicide in August 2014. It’s titled The terrorist inside my husband’s brain, the ‘terrorist’ being Lewy Body disease (LBD), the neurodegenerative disorder that, as Schneider Williams recounts, destroyed his life…’

‘Will we ever salute Vulcans or cuddle tribbles? An astrobiologist explores the latest thinking on the forms alien life might really take…’

‘All the Times has is three pages of Trump’s records from 1995. Everything else is informed speculation, extrapolation, and the word “could,” which appears again and again through the article.

Think about how dangerous that was for the paper. Trump could have released his tax returns and proven them wrong. Trump could have shown their speculation to be mere speculation, and used it as a cudgel to discredit their reporting on his campaign. The Times was far, far out on a limb.

What is in those returns? ‘

‘For the past several months, creepy clowns have been terrorizing America, with sightings of actual clowns in at least 10 different states.

These fiendish clowns have reportedly tried to lure women and children into the woods, chased people with knives and machetes, and yelled at people from cars. They’ve been spotted hanging out in cemeteries and they have been caught in the headlights of cars as they appear alongside desolate country roads in the dead of night.

This isn’t the first time there has been a wave of clown sightings in the United States. After eerily similar events occurred in the Boston area in the 1980s, Loren Coleman, a cryptozoologist who studies the folklore behind mythical beasts such as Bigfoot and the Loch Ness Monster, came up with something called “The Phantom Clown Theory,” which attributes the proliferation of clown sightings to mass hysteria (usually sparked by incidents witnessed only by children).

It’s impossible to determine which of these incidents are hoaxes and which are bona fide tales of clowning around taken to the extreme. Nonetheless, the perpetrators seem to be capitalizing on our longstanding love-hate relationship with clowns, tapping into the primal dread that so many children (and more than a few adults) experience in their presence.

In fact, a 2008 study conducted in England revealed that very few children actually like clowns. It also concluded that the common practice of decorating children’s wards in hospitals with pictures of clowns may create the exact opposite of a nurturing environment. It’s no wonder so many people hate Ronald McDonald.

But as a psychologist, I’m not just interested in pointing out that clowns give us the creeps; I’m also interested in why we find them so disturbing. Earlier this year I published a study entitled “On the Nature of Creepiness” with one of my students, Sara Koehnke, in the journal New Ideas in Psychology. While the study was not specifically looking at the creepiness of clowns, much of what we discovered can help explain this intriguing phenomenon…’

‘Springsteen has long been committed to social justice; in writing about depression, he has perhaps undertaken a new cause, one that seeks to combat the stereotypes and stigmas about mental illness that still exist today.

Struggles with mental illness are common and familiar among rock and pop stars. They include Beyoncé, Eric Clapton, Kurt Cobain, Sheryl Crow, Janet Jackson, Billy Joel, Jon Bon Jovi, Alicia Keys, Lady Gaga, John Lennon, Alanis Morissette and Brian Wilson. Were one also to include artists known to self-medicate with drugs and alcohol but otherwise undiagnosed, the list would be far longer. The medical literature, though limited, strongly indicates that being a rock star is a high-stress lifestyle.

But Springsteen’s disclosure is arguably unique because his image runs counter to stereotypes of depression. According to one study, for years the media has reinforced negative stereotypes of people with mental illness, often depicting them as “inadequate, unlikable, dangerous” and absent a “social identity: single or of unknown marital status, frequently without identifiable employment … confused, aggressive and unpredictable.”

These media depictions, according to public health scholar Heather Stuart, “also model negative reactions to the mentally ill, including fear, rejection, derision and ridicule” and “impair self-esteem, help-seeking behaviors, medication adherence and overall recovery.” Stuart blames the media for fueling much of the stereotypes of the mentally ill that persist today.

Springsteen, however, is a living, breathing repudiation of these media-fueled stereotypes…’

‘In large evolutionary analysis, humans are violent mammals, but on par with primates.’

‘Dutch designer Daan Roosegaarde’s cycle path, illuminated with patterns based on Vincent Van Gogh’s painting The Starry Night, officially opens in Nuenen this evening. The surface of the Van Gogh-Roosegaarde Bicycle Path is coated with a special paint that uses energy gathered during the day to glow after dark.’