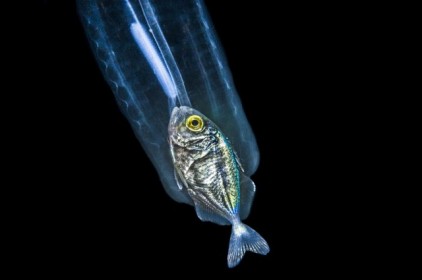 ‘The alien world of the deep sea has some very odd inhabitants.Photographer Wayne MacWilliams dove 150 meters (500 feet) into the waters off the coast of Singer Island in Palm Beach, Florida, to capture a particularly fascinating moment from the deep sea’s black abyss.The images show a translucent sea creature, possibly a species of comb jelly, with a shimmering fish in its belly that it had eaten just moments before….’

‘An anonymous source has handed 2.6TB worth of records from Mossack Fonseca, one of the world’s largest offshore law firms, to a consortium of news outlets, including The Guardian.The dump includes 11.5M files, whose contents reveal a complex system of tax evasion that implicates some of the richest, most powerful people in the world, from Vladimir Putin to former members of the UK Tory government and the father of UK Tory prime minister David Cameron.’

‘Like the adult version of the Reid Technique, the school version involves three basic parts: an investigative component, in which you gather evidence; a behavioral analysis, in which you interview a suspect to determine whether he or she is lying; and a nine-step interrogation, a nonviolent but psychologically rigorous process that is designed, according to Reid’s workbook, “to obtain an admission of guilt.” Most of the I.P.A. session, Schneider told me, focussed on behavioral analysis. Buckley described to trainees how patterns of body language—including slumping, failing to look directly at the interviewer, offering “evasive” responses, and showing generally “guarded” behaviors—could supposedly reveal whether a suspect was lying. (Some of the cues were downright mythological—like, for instance, the idea that individuals look left when recalling the truth and right when trying to fabricate.) Several times during the session, Buckley showed videos of interrogations involving serious crimes, such as murder, theft, and rape. None of the videos portrayed young people being questioned for typical school misbehavior, nor did any of the Reid teaching materials refer to “students” or “kids.” They were always “suspects” or “subjects.” …’

One of America’s great paradoxes (or perhaps hypocrisies) is its claim to be a global beacon of freedom, even as it jails more of its citizens—by population percentage and in raw numbers—than any other country in the world. This tendency toward suspicion, hyper-enforcement and punishment is so pervasive it even trickles down to our kids.

CNN cites a National Center for Education Statistics report that finds 43 percent of U.S. public schools have some form of security personnel patrolling their halls and grounds, a figure that rises to 63 and 64 percent, respectively, in public middle and high schools.

In addition to the school resource officer, the over-policing of American society has now given rise to a new figure: the educator-interrogator. As the Guardian noted last year and the New Yorker discussed recently, school administrators are increasingly being trained as interrogators to extract confessions from students for so-called “crimes”—most often, minor offenses from schoolyard scuffles to insubordination. Instruction in the interrogation arts is provided by John E. Reid and Associates, a global interrogation training firm that contracts with police departments, armed services divisions and security companies around the country. According to the New Yorker, the company has taught its patented “Reid Technique” to hundreds of school administrators in eight states. That training may be leading to an increasing number of students ‘fessing up, even when they have nothing to confess to.

As the New Yorker notes, “like the adult version of the Reid Technique, the school version involves three basic parts: an investigative component, in which you gather evidence; a behavioral analysis, in which you interview a suspect to determine whether he or she is lying; and a nine-step interrogation, a nonviolent but psychologically rigorous process that is designed, according to Reid’s workbook, ‘to obtain an admission of guilt.’”