“If you visit a Northwest ocean beach this summer, you’ll likely run across objects from last year’s Japanese tsunami.

The things you’ll likely see include milk jugs, detergent bottles, tooth brushes and bottles for water, pop or juices with Japanese stamps, marks and labels. Perhaps a soccer ball or a volleyball — two that washed up on an Alaskan island have been claimed by their Japanese owners.

The things you are highly unlikely to see are human remains, refrigerators or anything else that would have to be sealed to float or can come apart, like bigger parts of houses. Months on the ocean will breakup anything with parts, experts say.” (via KPLU News for Seattle and the Northwest). 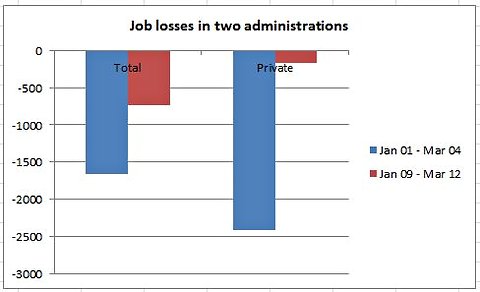 Even regular reporters noticed that the factory in question closed under, yes, George W. Bush — a fact Romney failed to mention, although his campaign scrambled to cover for him afterwards.

What I didn’t see mentioned was the point that this was a drywall factory — that is, a supplier of a product largely used in home construction. It’s one thing to say that Obama should have revived the economy as a whole; it’s another to say that he should have brought back the housing bubble!

Finally, why should we believe that Romney’s policies — basically tax cuts for the rich, as usual — would yield great economic results? Well, I guess you can point to Bush’s example; how did his administration at this point compare with Obama? From BLS data:

You can offer various excuses for Bush’s record, I guess. But on the face of it, what possible reason is there to think that Bush-like policies would be an improvement?” (via NYTimes.com).