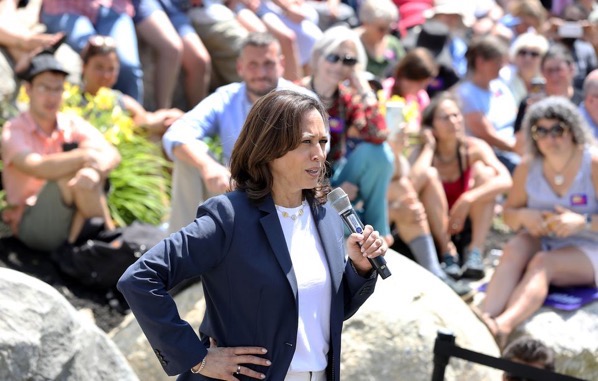 ’“I’ve prosecuted predators,” she said. “And we have a predator living in the White House. He has predatory instincts and a predatory nature.”

Harris accused President Trump of wanting to return to an era before the Civil Rights Act of 1964 and the Roe v. Wade decision, in which the US Supreme Court case found a constitutional right to abortion.

’…Trump launched a racist Twitter attack against four Democratic congresswomen of color over the weekend, telling Alexandria Ocasio-Cortez, Rashida Tlaib, Ilhan Omar and Ayanna Pressley to “go back” to their home countries. The tweet implies that the congresswomen weren’t born in America, but they all are American citizens. Ocasio-Cortez, Tlaib and Pressley are natural-born US citizens, while Omar was born in Somalia and immigrated to the US when she was young. Telling people of color to “go back to where you came from” is a tactic often used by racists to try to silence blacks and other minorities.

The congresswomen hit back at Trump, with Ocasio-Cortez tweeting that Trump is “angry because you can’t conceive of an America that includes us.” House Speaker Nancy Pelosi and other Democrats also condemned the President. Will members of the Republican Party join the Dems in denouncing Trump’s tweet? No, says CNN’s Stephen Collinson, because most GOP voters and lawmakers are satisfied with the ideological direction of the Trump presidency and are willing to turn a blind eye to his conduct. “The President knows he can trade in such base tactics because he will pay no price in a Republican Party cowed by his fervent political base,” Collinson writes.…’