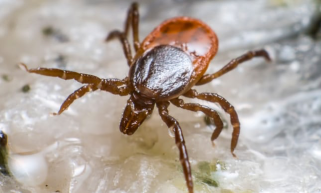 ‘People living in tick-endemic areas around the world are being warned of an increasingly prevalent, potentially life-threatening side effect to being bitten: developing a severe allergy to meat.

The link between tick bites and meat allergies was first described in 2007, and has since been confirmed around the world.

Sufferers of “tick-induced mammalian meat allergy” will experience a delayed reaction of between two and 10 hours after eating red meat. Almost invariably, they are found to have been bitten by a tick – sometimes as much as six months before.

Tick populations booming due to climate change Read more Although most cases of tick bites of humans are uneventful, some immune systems are sensitive to proteins in the parasite’s saliva and become intolerant of red meat and, in some cases, derivatives such as dairy and gelatine.

Poultry and seafood can be tolerated, but many sufferers choose to avoid meat entirely….’