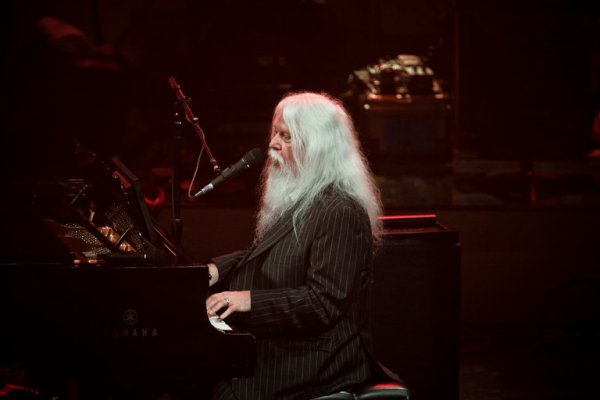 ‘With a top hat on his head, hair well past his shoulders, a long beard, an Oklahoma drawl and his fingers splashing two-fisted barrelhouse piano chords, Mr. Russell cut a flamboyant figure in the early 1970s. He led Joe Cocker’s band Mad Dogs & Englishmen, appeared at George Harrison’s 1971 Concert for Bangladesh and had hits of his own, including “Tight Rope.”

His songs also became hits for others, among them “Superstar” (written with Bonnie Bramlett) for the Carpenters, “Delta Lady” for Joe Cocker and “This Masquerade” for George Benson. More than 100 acts have recorded “A Song for You,” a song Mr. Russell said he wrote in 10 minutes.

By the time Mr. Russell released his first solo album in 1970, he had already played on hundreds of songs as one of the top studio musicians in Los Angeles. Mr. Russell was in Phil Spector’s Wall of Sound Orchestra, and he played sessions for Frank Sinatra, Sam Cooke, Aretha Franklin, the Ventures and the Monkees, among many others. He is heard on “Mr. Tambourine Man” by the Byrds, “A Taste of Honey” by Herb Alpert, “Live With Me” by the Rolling Stones and all of the Beach Boys’ early albums, including “Pet Sounds.” …’

The hazard of cherishing the music of my youth is that it is increasingly becoming a memento mori.

This bystander’s guide to Islamophobic harassment was created by a young illustrator and filmmaker who works in Paris and goes by Maeril. She made versions in both French and English.

Below the guide, Maeril wrote that this technique works for any kind of harassment in a public space, but she was specifically focusing on the Islamophobia she’s witnessed in Paris.

In the wave of reactions to Donald Trump’s election as the 45th president of the U.S., safety pins have taken on a new meaning in the country.

Some Americans are wearing safety pins as a symbol of solidarity with victims of racism, homophobia and religious discrimination. People have spoken out on Twitter to say that their safety pins show that they are an ally to marginalized groups.

We don’t get to make ourselves feel better by putting on safety pins and self-designating ourselves as allies.

How a man you’ve never heard of could be our last chance to stop Trump.

Sounds like it may be worth supporting Jackson Cantrell’s Louisiana Senate bid.

In the early hours of Nov. 9, 2016, the winner of the presidential election was declared. As the day unfolded, the extent to which a moral rhinoceritis had taken hold was apparent. People magazine had a giddy piece about the president-elect’s daughter and her family, a sequence of photos that they headlined “way too cute.” In The New York Times, one opinion piece suggested that the belligerent bigot’s supporters ought not be shamed. Another asked whether this president-elect could be a good president and found cause for optimism. Cable news anchors were able to express their surprise at the outcome of the election, but not in any way vocalize their fury.
All around were the unmistakable signs of normalization in progress. So many were falling into line without being pushed. It was happening at tremendous speed, like a contagion. And it was catching even those whose plan was, like Dudard’s in “Rhinoceros,” to criticize “from the inside.”
Evil settles into everyday life when people are unable or unwilling to recognize it. It makes its home among us when we are keen to minimize it or describe it as something else. This is not a process that began a week or month or year ago. It did not begin with drone assassinations, or with the war on Iraq. Evil has always been here. But now it has taken on a totalitarian tone.
At the end of “Rhinoceros,” Daisy finds the call of the herd irresistible. Her skin goes green, she develops a horn, she’s gone. Berenger, imperfect, all alone, is racked by doubts. He is determined to keep his humanity, but looking in the mirror, he suddenly finds himself quite strange. He feels like a monster for being so out of step with the consensus. He is afraid of what this independence will cost him. But he keeps his resolve, and refuses to accept the horrible new normalcy. He’ll put up a fight, he says. “I’m not capitulating!”

Here’s what I am saying: You’ve said all along that you disagree with the ‘inelegant’ things Trump says about all kinds of groups of people. You’ve agreed that his statements about women are abhorrent. You say you like him because he gets stuff done, not because of the way he speaks. And I believe to my core that you agree that all people should be treated with decency.
So, now you get to prove it. It’s actually so simple: Demand that it end. Demand that he finally, vociferously reject the KKK and other white supremacist groups. Every single time he or his surrogates says something over-generalized about any group of people — “all Black people live in inner cities and their lives are hell”; “all/most/many refugees/immigrants/Muslims/whatever are dangerous”; “that woman is only a 7” — hold him to the highest standard you have. Contact him and tell him, “I support you, I voted for you, and I demand that you stop saying these things.”

Across Britain, the verb to trump is a euphemism for flatulence, especially malodorous flatulence. Are you familiar with the slightly scurrilous recommendation for coping with public speaking anxiety that one envision one’s audience as naked? Well, there may be a parallel here for dealing with the profound anxiety and dread so many, including myself, feel in contemplating the reality of Trump’s presidency. I am going to practice visualizing his dangerous and offensive blowhard pronouncements as offensive eruptions of a different sort out of his mouth, and malodorous ones at that.