During this election season, we have something very much in common with woodpeckers. Many of us want to bang our heads against the wall. But the birds fare better; they have some clever adaptations to keep their noggins safe.

‘The full moon on November 14 will look like an extra-bright spotlight in the sky— that’s because it will be a notable “supermoon” that won’t be this close to Earth again for another 18 years. In fact, the last time it looked this big was 1948, according to Space.com.

…[S]ince the moon’s orbit has an elliptical shape, sometimes it is closer to Earth than other times. Astronomers call the closest-to-the-Earth moment the perigee. What makes November 14 special is that the moon “becomes full within about two hours of perigee—arguably making it an extra-super moon,” NASA explained.This year actually has three supermoons. Besides November’s, there was one on October 16 and will be another on December 14, although neither are as close as this

This year actually has three supermoons. Besides November’s, there was one on October 16 and will be another on December 14, although neither are as close as this month’s.The November 14 supermoon is not only the closest full moon of the century so far, it won’t be matched until 2034. So if you miss this one, mark your calendar for November 25 of that year.

The November 14 supermoon is not only the closest full moon of the century so far, it won’t be matched until 2034. So if you miss this one, mark your calendar for November 25 of that year…’

‘In a new Fan Theories clip posted on its official channel, Netflix explained that Walter White’s Blue Sky meth may be the chemical component that turned the first humans into zombies.

The video shows various elements and references that appear in both TV series, which is how this fan theory was born. Fans looked at various Easter Eggs in Breaking Bad and The Walking Dead and made several plausible connections. And some of them are extremely interesting.

For example, Daryl’s stash of drugs contains something that looks just like Blue Sky. He even made a reference to a “janky little white guy,” who sold drugs to his brother Merle. At one point, that dealer said “I’m gonna kill you, bitch.” Do you know anyone who speaks like that?Moreover, Glenn might be the car dealer who had to deal with Walter’s tantrum when returning a particularly red Dodge Challenger. The same car was then seen in The Walking Dead, and Glenn was driving it.

Check out Netflix’s entire explanation below, complete with a detail about the Breaking Bad person who could be one of the first Blue Sky-enabled walkers…’

‘Mattthew Luckhurst, a 5-year veteran of San Antionio Police Department, was fired after feeding shit to a homeless person. Josh Baugh reports that he “placed fecal matter between two pieces of bread” and placed it in a styrofoam container next to his victim. It’s not clear if they ate it…’ 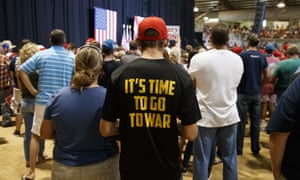 ‘Misogyny, racism and bigotry won’t go away if Donald Trump loses next week’s election; it was already here before he drew it out into the mainstream…’

Was Trump being prophetic — and menacing — when he insisted that the election was rigged?

‘These last-minute false leaks come after decades of animosity toward both Clintons from inside the bureau.’

Why We Should All Fear the Rot Within the FBI

‘What James Comey did was bad enough, but now he’s clearly at the mercy of a right-wing faction of his own agents. Who can stop them?’

‘This week, an HIV epidemic has been officially declared in the Russian city of Yekaterinburg, where the health department estimates 1 out of every 50 residents is a carrier of the virus. The government has been hesitant to recognize that Russia is experiencing one of the world’s fastest-growing HIV epidemics. In May, the head of the state AIDS center said that the country hit a tragic milestone of one million diagnosed HIV cases; it’s estimated that three million people will be infected by 2020.

In Yekaterinburg, and elsewhere in the country, an estimated half of HIV infections were contracted through intravenous drug use. And yet, no one seems to be prepared to deal with heroin dependency effectively or ethically. There are few addiction treatment centers, harm-reduction services are virtually non-existent, and methadone therapy is illegal. The alternatives are very grim.

“The public attitude is very hostile and the government doesn’t want to seem too humane towards drug users,” HIV activist Anya Sarang tells me. Sarang is the director of the Andrey Rylkov Foundation for Health and Social Justice, a grassroots organization for HIV and overdose prevention. It is the only group offering free needle exchanges in Moscow. The government’s primary strategy for dealing with people struggling with addiction is “making them feel miserable,” Sarang says. “As if the social pressure will make them stop using drugs.”

…According to the World Health Organization, opioid substitution therapy (OST), albeit imperfect, is still the most promising method of reducing heroin dependence. By being prescribed orally administrated medicine such as methadone or buprenorphine, patients can substitute illicit intravenous drug use with withdrawal relief in a supervised clinical setting. In developed countries, OST is recognized to counter overdoses, criminal behavior and public health risks such as HIV. But among Russian authorities, it’s a despised “narcoliberal” idea.

In a country with the largest population of injection drug users, methadone therapy is illegal. Methadone distribution is punishable with up to 20 years in prison. Heroin addicts— “anti-social elements,” as they’re called—are expected to quit cold-turkey, perhaps in one of the jail-like “treatment” centers…’

‘Amyloid beta plaques are gooey globs that clump together, stick to neurons inside the brain and kill them off, outright. The slow but steady accumulation of these plaques leads to Alzheimer’s disease. Tau protein tangles aid them by cutting off the brain’s supply lines, as the plaques march across white and gray matter, taking out the memory and cognitive ability, and wreaking havoc on the patient and their family. No treatment can halt this invasion once it occurs. But now, a small trial for an experimental drug is lending patients and loved ones hope.This drug inhibits the production of these plaques, according to a small study. Scientists at Merck Research Laboratories have announced the drug Verubecestat. In a small, phase I trial it “switched off” the production of the amyloid proteins that form these plaques. This in turn slowed the progression of the disease…’

‘The US Centers for Disease Control has released a report in which it identifies over a dozen cases of a deadly, antibiotic-resistant fungus called Candida auris. It’s the first time this super-strain has been found in the US, and disturbingly, four of the first seven patients infected with it have died…’