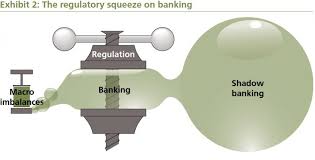 “The shadow banking system is vastly bigger than regulators had thought, say econophysicists who have developed a powerful new way to measure its hidden impactIn most parts of the world, the banking system is closely regulated and monitored by central banks and other government agencies. That’s just as it should be, you might think.

But banks have a way round this kind of regulation. For the last decade or so, it has become common practice for banks to do business in ways that don’t show up on conventional balance sheets. Before the 2008 financial crisis, for example, many investment banks financed mortgages in this way. To all intents and purposes, these transactions are invisible to regulators.

Their conclusions are revealing. They say that the shadow banking system is vastly bigger than anyone had imagined before. And although its size dropped dramatically after the financial crisis in 2008, it has since grown dramatically and is today significantly bigger than it was even then.” (Medium).