“The NFL is done for the year, but it is not pure fantasy to suggest that it may be done for good in the not-too-distant future. How might such a doomsday scenario play out and what would be the economic and social consequences?

By now we’re all familiar with the growing phenomenon of head injuries and cognitive problems among football players, even at the high school level. In 2009, Malcolm Gladwell asked whether football might someday come to an end, a concern seconded recently by Jonah Lehrer.

Before you say that football is far too big to ever disappear, consider the history: If you look at the stocks in the Fortune 500 from 1983, for example, 40 percent of those companies no longer exist. The original version of Napster no longer exists, largely because of lawsuits. No matter how well a business matches economic conditions at one point in time, it’s not a lock to be a leader in the future, and that is true for the NFL too. Sports are not immune to these pressures. In the first half of the 20th century, the three big sports were baseball, boxing, and horse racing, and today only one of those is still a marquee attraction.

The most plausible route to the death of football starts with liability suits….” (via Grantland). 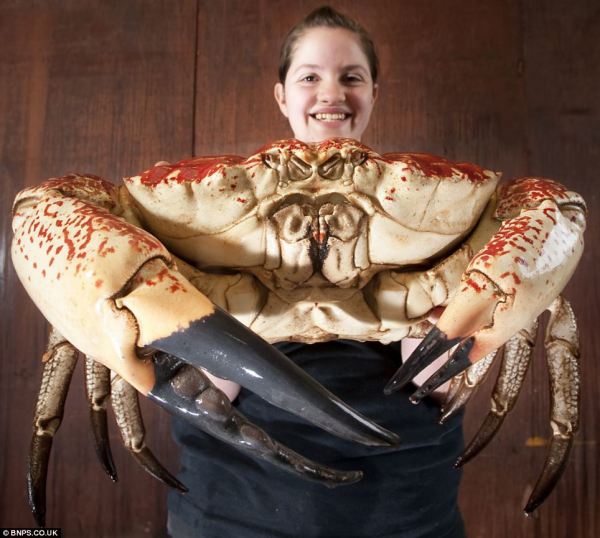 ‘Claude is 100 times bigger than a standard UK shore crab. Yet he is still a juvenile and will grow to double his weight. Claude was caught off the coast of Tasmania last month, but was sold to the Sea Life group along with two other Tasmanian giant crabs.’ (via Mail Online, with thanks to lloyd).

‘…[W]hen the language style of two people matched, when they used pronouns, prepositions, articles and so forth in similar ways at similar rates, they were much more likely to end up on a date… This is not because similar people are attracted to each other, Pennebaker says; people can be very different. It’s that when we are around people that we have a genuine interest in, our language subtly shifts.

But some of his most interesting work has to do with power dynamics. He says that by analyzing language you can easily tell who among two people has power in a relationship, and their relative social status. “It’s amazingly simple,” Pennebaker says, “Listen to the relative use of the word “I.” What you find is completely different from what most people would think. The person with the higher status uses the word “I” less….. We use “I” more when we talk to someone with power because we’re more self-conscious. We are focused on ourselves – how we’re coming across – and our language reflects that….’ (via NPR).