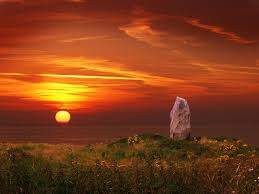 ‘Midsummer or the Summer Solstice is the most powerful day of the year for the Sun God. Because this Sabbat glorifies the Sun God and the Sun, fire plays a very prominent role in this festival…

Most cultures of the Northern Hemisphere mark Midsummer in some ritualised manner and from time immemorial people have acknowledged the rising of the sun on this day. At Stonehenge, the heelstone marks the midsummer sunrise as seen from the centre of the stone circle.In ancient times, the Summer Solstice was a fire-festival of great importance when the burning of balefires ritually strengthened the sun. It was often marked with torchlight processions, by flaming tar barrels or by wheels bound with straw, which were set alight and rolled down steep hillsides. The Norse especially loved lengthy processions and would gather together their animals, families and lighted torches and parade through the countryside to the celebration site.

The use of fires, as well as providing magical aid to the sun, were also used to drive out evil and to bring fertility and prosperity to men, crops and herds. Blazing gorse or furze was carried around cattle to prevent disease and misfortune; while people would dance around the balefires or leap through the flames as a purifying or strengthening rite. The Celts would light balefires all over their lands from sunset the night before Midsummer until sunset the next day. Around these flames the festivities would take place. In Cornwall up to the mid 18th century the number and appearance of fires seen from any given point was used as a form of divination and used to read the future.

Astronomically, it is the longest day of the year, representing the God at full power. Although the hottest days of the summer still lie ahead, from this point onward we enter the waning year, and each day the Sun will recede from the skies a little earlier, until Yule, when the days begin to become longer again…’

— Via The Wheel Of The Year

Midsommar: What the hell just happened? (The Guardian; spoilers)