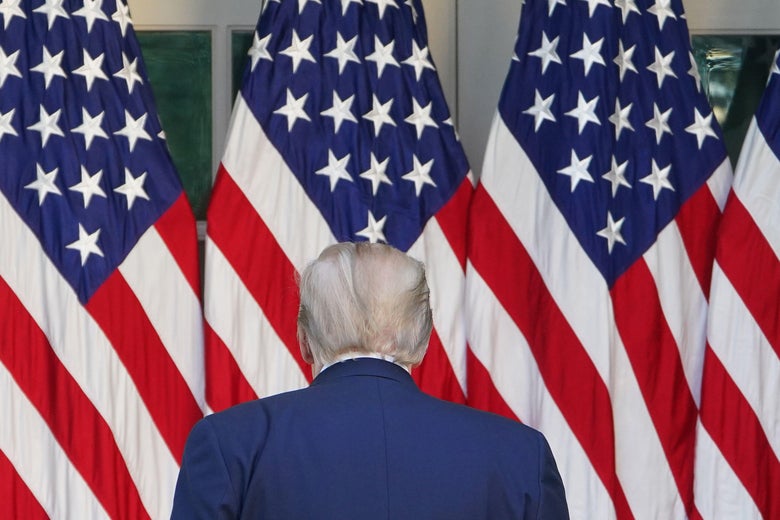 Dahlia Lithwick writing about what would be unprecedented power grab in Slate:

‘At his coronavirus press conference on Wednesday, President Donald Trump issued a stunning threat-slash-promise-slash-constitutional fantasy. Complaining that Democrats were blocking his judicial appointees, the president said that the Senate should either end its current pro forma session and come back to Washington amidst a pandemic to approve his appointees or officially adjourn so that he can make recess appointments. “The Senate has left Washington until at least May 4,” Trump said. “The Constitution provides a mechanism for the president to fill positions in such circumstances, the recess appointment it’s called. The Senate’s practice of gaveling into so-called pro forma sessions where no one is even there has prevented me from using the constitutional authority that we’re given under the recess provisions. The Senate should either fulfill its duty and vote on my nominees or it should formally adjourn so that I can make recess appointments.”

“If the House will not agree to that adjournment,” he continued, “I will exercise my constitutional authority to adjourn both chambers of Congress. The current practice of leaving of town while conducting phony pro forma sessions is a dereliction of duty that the American people cannot afford during this crisis. It is a scam what they do.”

Trump is likely referencing Article 2, Section 3 of the Constitution, which provides that the president can “on extraordinary Occasions, convene both Houses, or either of them, and in Case of Disagreement between them, with Respect to the Time of Adjournment, he may adjourn them to such Time as he shall think proper.” Does he have the power to actually do this, though? According to this 1964 article from the New York Times the Senate Parliamentarian issued an opinion in that year, regarding presidential authority to adjourn Congress: “The answer is yes—but only under, certain unusual circumstances. These conditions are so limited that a President has never exercised the power to adjourn Congress.” …’