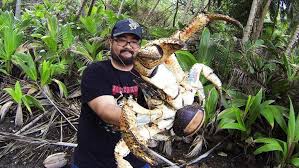 The secret of the 1937 disappearance of the famed aviator may lie in the underground haunts of the world’s largest land invertebrate. One theory is that Earhart made an emergency landing on one of the islands of Kiribati, which teems with coconut crabs. These monsters can measure three feet across and weigh more than nine pounds. Their claws exert more force than most animal bites. At night, observed one veteran of multiple expeditions to Kiribati, shining a flashlight can reveal hundreds of crabs clustering outside the shadow ring. One does not sleep on the ground.

One theory says that Earhart was stranded on the island of Nikumaroro after flying off course and making an emergency landing with her navigator Fred Noonan, who soon died. Thirteen bones suspected to have been from Earhart’s body were found by British colonists in 1940 (they were sent to Fiji for analysis but later lost). Observations of the coconut crabs endemic to the area where the remains were found establishes that the eat, among other things, carrion, stripping a body to the bones in less than two weeks and dragging the bones back to their burrows. This may have happened to the rest of Earhart’s remains.Forensic dogs brought to the area two years ago signaled that someone had died there and excavations are proceeding.