“Don’t you remember the 5th of November

Is gunpowder treason and plot?

I don’t see the reason why gunpowder treason

Should ever be forgot

A stick and a stake, for Queen Victoria’s Sake

I pray master give us a faggit

If you dont give us one well take two

The better for us and the worse for you” 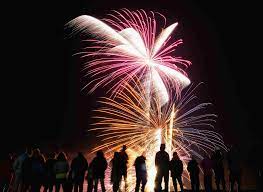 Tomorrow is Guy Fawkes Night (Bonfire Night or Gunpowder Night), the anniversary of the ambitious but abortive Gunpowder Plot of 1605, a failed attempt by a group of persecuted English Catholics to assassinate Anglican King James I of England and. VI of Scotland in order to replace him with a Catholic. Guy Fawkes, who was left in charge of the gunpowder placed underneath the House of Lords, was discovered and arrested and the plot unmasked. Fawkes, along with other surviving conspirators, was executed in January 1606 (hung, drawn and quartered).

A law establishing the anniversary of the thwarted plot as a day of thanksgiving was quickly passed and became the annual occasion for anti-Catholic fervor, with the ringing of church bells and the lighting of bonfires, to the point of forgetting the deliverance of the monarch. “Although Guy Fawkes’ actions have been considered acts of terrorism by many people, cynical Britons… sometimes joke that he was the only man to go to Parliament with honourable intentions.”

Fun fact: it seems that the term Guy (which now simply refers to a man or even more broadly a person) became a pejorative to describe someone grotesque because of the conception of Guy Fawkes’ villainy.

Celebrations of Guy Fawkes Day persist through the British Isles and become occasions for revelling in the burning of effigies (“guys”) of the hate figures of the day alongside Fawkes.The ritual has included Margaret Thatcher, John Major, Boris Johnson, donald trump, and disgraced Hollywood produced Harvey Weinstein among others. 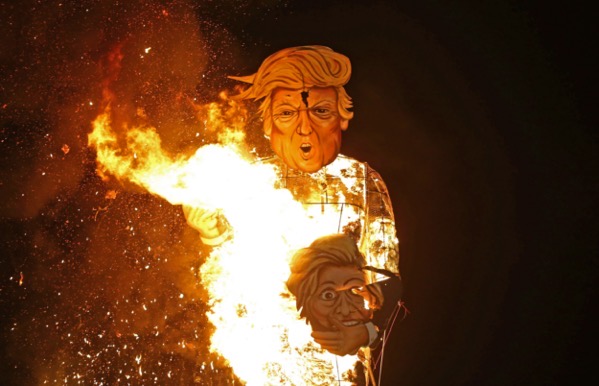 The annual festival has become much more about festive fun than solemn remembrance:

“One important aspect of the celebration is certainly venting! Shouting into the nights air is a wonderful release and an important part of the celebration through the centuries. There is something magic and healing about noise — cannons, bells and chants. Divide the group and assign each a different chant. Let them compete for noise and drama. Great fun. The chants are important aspects of freedom of expression and freedom to hold one’s own beliefs. Like much of that which is pure celebration chants need not be considered incantations or wishes of ill will at all times. Taken with the rest of celebration they contribute to a much more abstract whole where fun is the primary message for most.” 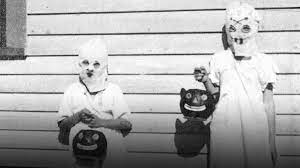 Some say that the celebration of Guy Fawkes Night helped shape the modern tradition of trick or treating, although it has ancient pre-Christian origins. Some American colonists celebrated Guy Fawkes Day and those fleeing the Irish Potato Famine in the 1840s helped popularize Hallowe’en. By the 19th century, British children wearing masks and carrying effigies of Fawkes were roaming the streets on the evening of November 5 asking for “a penny for the Guy,” with any money gathered being used to buy fireworks — the explosives never used by the plotters —  to be set off while the Guy was immolated on the bonfire. 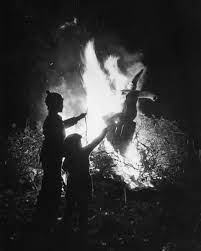 Many feel that Guy Fawkes (Bonfire Night) has a particularly Pagan feel. As with Hallowe’en, it may be no accident that Guy Fawkes Day coincides with the Celtic festival of Samhain, one of the moon festivals featuring large bonfires. Some think of Guy Fawkes Night as a sort of detached Samhain celebration and the effigies of Guy Fawkes burned on the bonfires compare with the diabolical images associated with Samhain or Hallowe’en. But, as one fan says, “Guy Fawkes Night has never sold out to Hallmark… Halloween is all about fakery – makeup, facepaint, costumes, imitation blood. Fireworks Night is about very real, very powerful, very hot flames.” 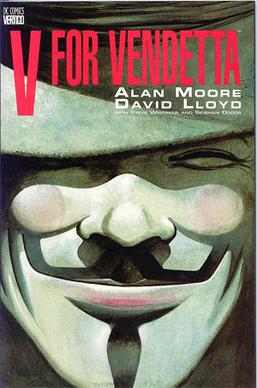 But the folklore of the holiday does continue to morph. We don’t celebrate the thwarting of the plot because we are happy with our oppressive rulers, and Guy Fawkes has gone from being reviled as a villain to revered as a hero. His reputation has gone from that of a religious extremist to one of a populist underdog, especially after Alan Moore’s graphic novel V for Vendetta and its 2005 film adaptation, in which the masked knife-wielding V, who also plots to bomb the Houses of Parliament, lashes out against the fascist state in a dystopian future Britain. (It was Moore’s collaborator David Lloyd who developed the idea of dressing V as Guy Fawkes.) Since then, protestors have donned V’s mask as an all-purpose badge of rebellion in anti-government demonstrations and the anti-capitalist movement, particularly Occupy. The hacktivist group Anonymous has adopted the Guy Fawkes mask as their symbol. In 2011, it was the top-selling mask on Amazon and has been seen throughout the ongoing Hong Kong protests against Chinese repression. David Lloyd commented, “The Guy Fawkes mask has now become a common brand and a convenient placard to use in protest against tyranny – and I’m happy with people using it, it seems quite unique, an icon of popular culture being used this way.” 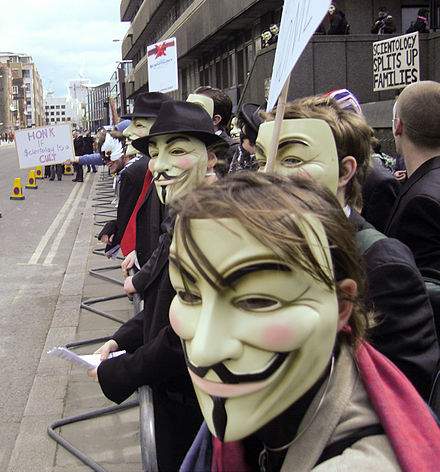 Here is a collection of verse in celebration of Guy Fawkes Day. You are also welcome to don your masks, listen for some fireworks, scan the horizon from a high place for bonfires dedicated to smashing the state, or free yourself from your unwanted burdens by watching them go up in flames.