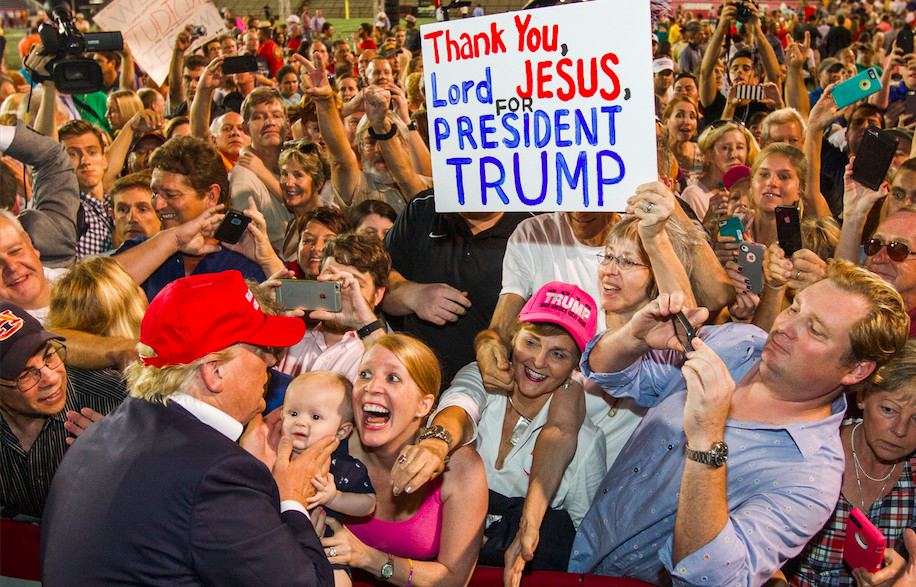 ‘…Authoritarians, as a growing presence in the GOP, are a real constituency that exists independently of Trump — and will persist as a force in American politics regardless of the fate of his candidacy.

If Trump loses the election, that will not remove the threats and social changes that trigger the “action side” of authoritarianism. The authoritarians will still be there. They will still look for candidates who will give them the strong, punitive leadership they desire.

And that means Donald Trump could be just the first of many Trumps in American politics, with potentially profound implications for the country.

It would also mean more problems for the GOP. This election is already showing that the party establishment abhors Trump and all he stands for — his showy demagoguery, his disregard for core conservative economic values, his divisiveness.

WE MAY NOW HAVE A DE FACTO THREE-PARTY SYSTEM: THE DEMOCRATS, THE GOP ESTABLISHMENT, AND THE GOP AUTHORITARIANS
But while the party may try to match Trump’s authoritarian rhetoric, and its candidates may grudgingly embrace some of his harsher policies toward immigrants or Muslims, in the end a mainstream political party cannot fully commit to extreme authoritarian action the way Trump can.

That will be a problem for the party. Just look at where the Tea Party has left the Republican establishment. The Tea Party delivered the House to the GOP in 2010, but ultimately left the party in an unresolved civil war. Tea Party candidates have challenged moderates and centrists, leaving the GOP caucus divided and chaotic.

Now a similar divide is playing out at the presidential level, with results that are even more destructive for the Republican Party. Authoritarians may be a slight majority within the GOP, and thus able to force their will within the party, but they are too few and their views too unpopular to win a national election on their own.

And so the rise of authoritarianism as a force within American politics means we may now have a de facto three-party system: the Democrats, the GOP establishment, and the GOP authoritarians.

And although the latter two groups are presently forced into an awkward coalition, the GOP establishment has demonstrated a complete inability to regain control over the renegade authoritarians, and the authoritarians are actively opposed to the establishment’s centrist goals and uninterested in its economic platform.

Over time, this will have significant political consequences for the Republican Party. It will become more difficult for Republican candidates to win the presidency because the candidates who can win the nomination by appealing to authoritarian primary voters will struggle to court mainstream voters in the general election. They will have less trouble with local and congressional elections, but that might just mean more legislative gridlock as the GOP caucus struggles to balance the demands of authoritarian and mainstream legislators. The authoritarian base will drag the party further to the right on social issues, and will simultaneously erode support for traditionally conservative economic policies….’