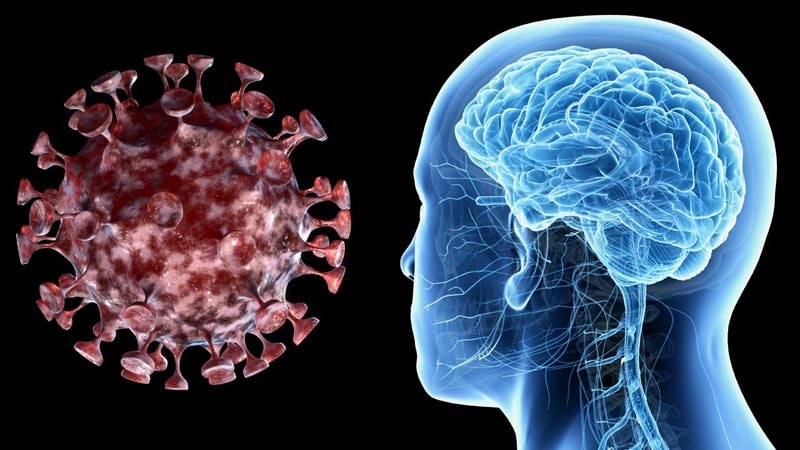 ‘Scientists are racing to figure out why some patients also develop neurological ailments like confusion, stroke, seizure, or loss of smell….’

All vulnerable patients with infectious illnesses can suffer mental status alterations. High fevers make patients delirious. (The first thing investigated in the emergency room in an acute confusional presentation in a frail elder is the possibility of a urinary tract infection.)

It is possible that the coronavirus can directly invade the CNS but it is not known yet if it can cross the blood-brain barrier. The CNS effects may instead be due to the immune response provoked by the infection, which induces the secretion of immune-active molecules called cytokines. This so-called ‘cytokine storm’, which is also seen as a rare complication of other viral infections such as the flu, has the potential to attack and damage brain tissue.

One piece of evidence about whether the neurological complications are caused by direct viral invasion of the brain or indirect immune-response effects is whether viral particles are found in cerebrospinal fluid obtained by lumbar puncture from affected individuals. Case reports are contradictory with regard to CSF findings. There are not yet good guidelines or standardized protocols for detecting the virus in cerebrospinal fluid, which is a different process than testing nasal or throat swabs.

During the 2003 epidemic with the related coronavirus that caused SARS, which killed 774 people, a proportion of the autopsies performed on victims detected the viral genome in brain tissue in addition to its widespread presence in other organs. In animal models, SARS-CoV inoculated nasally rapidly spread into the brain via the olfactory neurons, showing a preference for the brainstem (which is involved in the control of respiration), and often caused death. The 1993 SARS-CoV and the current SARS-CoV2 which causes CoVid-19 both use the same cell surface receptor, ACE2, as their portals of entry into human cells.

Neurological symptoms likely only affect a proportion of infected patients. Reports first appeared in February in which 36% of a series of patients from Wuhan demonstrated neurological effects. Most were nonspecific (headaches, dizziness, or confusion) but a few patients had distinct neurological syndromes including strokes, prolonged seizures, and anosmia (loss of sense of smell). In some patients, the neurological symptoms preceded respiratory illness.

Interestingly, reports suggest that sudden anosmia may be more common than appreciated and one of the first symptoms of the infection. The olfactory receptors in the nose are “the only central nervous system cells exposed to the exterior world”, said one neuroscientist, and this might be the first place you would see CNS signs of CoVid infection if it was one of the virus’ behaviors. On the other hand, some clinicians think the loss of sense of smell is not a direct effect of the coronavirus infection. Some research suggests that human olfactory neurons do not express the ACE2 receptor, unlike other cells in the respiratory tract. Some theorize that the virus affects support cells for the olfactory neurons instead of those neurons themselves. Others suggest that the loss of smell may be due to secondary infection of the nasopharynx by Candida (yeast) in infected individuals.

A historical parallel to the neurological impact of CoVid-19 may exist. During and after the 1918 “Spanish flu’ epidemic, the world saw an epidemic of an atypical form of brain infection known as encephalitis lethargica or ‘sleeping sickness’ (as distinct from the African sleeping sickness transmitted by tsetse flies), which affected nearly 5 million people around the world between 1915-1926. A third died and many of those who survived where permanently neurologically impaired, left in a speechless, apathetic and immobile condition. Others, who appeared to make a complete recovery, developed neurological or psychiatric disorders years or decades later, e.g. the postencephalitic Parkinsonism which was the basis of the patients described in neurologist Oliver Sacks’ book Awakenings. Interestingly, there is speculation that Adolf Hitler may have had encephalitis lethargica as a young adult. There is strong evidence that he had Parkinsonism in his later years, and one one could certainly speculate that he suffered from mental health disturbances.

No recurrence of this epidemic has been reported. Although the cause of the brain infection remains uncertain, the strong correlation to the influenza epidemic suggests a causal link. Immunological evidence of influenza infection was frequently found in encephalitis lethargica patients, although recent studies show that no viral RNA appears in the few 100-year old samples of brain tissue from these patients. As argued above with respect to the coronavirus, while CNS pathology may be due to direct infection of the brain, a virus may or may not be able to cross the blood-brain barrier and enter the CNS. An alternative mechanism may be via an autoimmune response.