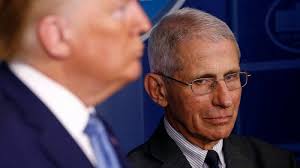 ‘Some of President Trump’s closes allies would like him to stop talking now.

And they’re saying it publicly.

While the New York Times cited several unnamed sources in this new report on Trump’s coronavirus briefings, there were also a handful of familiar names who spoke on the record urging Trump to stop participating in the daily pressers. Several White House allies, campaign members and Republicans lawmakers told the Times that Trump’s appearance is hurting him more than helping him.

Sen. Lindsey Graham (R-SC), a close ally and golf partner of the President, told the Times that Trump “sometimes drowns out his own message” and said he has encouraged Trump to decrease his appearances to “a once-a-week show.” Other Republican senators were willing to openly cringe at the daily briefings on-the-record as well: Sen. Shelly Moore (WV) said they tend to go “off the rails a little bit” and Sen. Susan Brooks (IN) criticized the length.

But the TV President is unlikely to be swayed. Administration officials told the Times that he’s expressed to aides he enjoys the free air time, which is unsurprising for a president who tweets about the “ratings” of his pandemic mitigating press conferences as thousands of Americans die of the virus…’