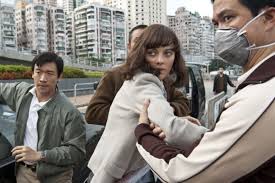 ‘A couple of weeks ago, my wife (also a law professor) and I wrapped up the final session of a seminar that we co-taught called Contagion. We wanted to offer an introduction to the outbreaks of infectious disease that have reshaped American life and law.

…Really more of a book club than a formal class, we focused on a different disease each time we met: cholera, Spanish flu, polio, AIDS, SARS, and Ebola.

…The class …had a surprising coherence. Every disease provokes its own unique dread and its own complex public reaction, but themes recurred across outbreaks:

Not every one of those themes was present for every disease; the doughboys who died of the Spanish flu, for example, were not thought to deserve their fate. But the themes were persistent enough over time to establish a pattern.

The books we assigned were outstanding. If you want to learn about the intersection of infectious disease, history, and public health, you could do worse than to start with them:

Via The Incidental Economist