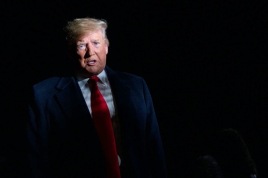 ’The two core lessons of the past few years are …: (1) Trumpism has a real base of support in the country with needs that must be addressed, and (2) Donald Trump is incapable of doing it and is such an unstable, malignant, destructive narcissist that he threatens our entire system of government. The reason this impeachment feels so awful is that it requires removing a figure to whom so many are so deeply bonded because he was the first politician to hear them in decades. It feels to them like impeachment is another insult from the political elite, added to the injury of the 21st century. They take it personally, which is why their emotions have flooded their brains. And this is understandable.

But when you think of what might have been and reflect on what has happened, it is crystal clear that this impeachment is not about the Trump agenda or a more coherent version of it. It is about the character of one man: his decision to forgo any outreach, poison domestic politics, marinate it in deranged invective, betray his followers by enriching the plutocracy, destroy the dignity of the office of president, and turn his position into a means of self-enrichment.…’