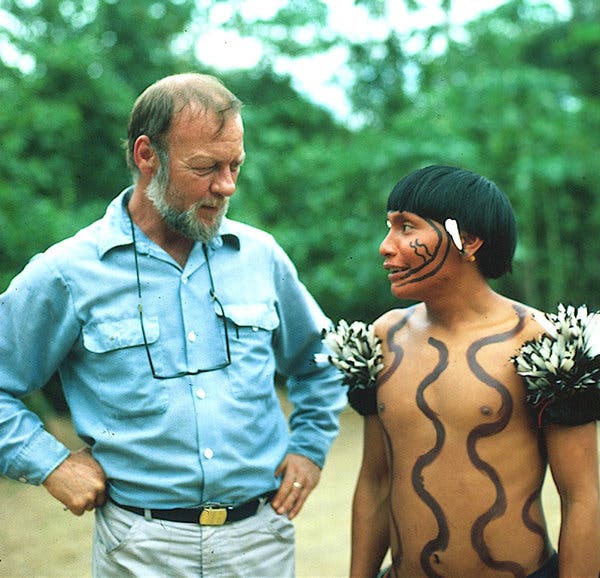 UC Santa Barbara anthropologist Napoleon Chagnon has died. Chagnon did notable work with remote tribes in the Amazonian rainforest, particularly the Yanomamo “fierce people”, but is perhaps best known for the so-called “Darkness” furor that ripped through the American Anthropological Association (AAA), almost destroying its credibility as an intellectual and professional organization. I previously commented on the controversy here, in 2000.

In 2000, anthropological journalist Patrick Tierney made claims that Chagnon and colleague geneticist James Neel had introduced a potentially fatal contraindicated measles vaccine to the tribe, probably inducing a 1968 epidemic, and then had withheld medical treatments might have saved lives, in the interest of testing “fascistic” eugenic theories. The AAA found the claims credible enough to investigate.

The truth appears to be quite the opposite. In prior fieldwork, Neel had determined that the Yanomamo were alarmingly vulnerable to measles and had personally arranged to bring vaccines with him on May 1968 expedition after consulting experts for advice on which vaccines to use, obtaining instructions about administration, and personally arranging fundraising.

Reportedly, measles had already broken out when the team arrived and, under Chagnon’s logistical leadership, they raced to contain the epidemic although supplies began to run out before everyone could be appropriately vaccinated. What is at stake is whether Neel and Chagnon are remembered as genocidal monsters or humanitarians.

interestingly, Chagnon’s work with the Yanomamo had been criticized by anthropologist within the AAA for perhaps a decade before the furor about the measles epidemic broke. He was subject to anonymous defamation probably spread by the Roman Catholic church because Chagnon had been publicly critical of their missionary work with the tribe. Doctrinal dispute about his theoretical approach also fueled the opposition.  After Tierney’s claims about the measles epidemic, an AAA task force formally faulting Chagnon on several counts was accepted by the AAA board in 2002 despite the fact that many other professional and academic institutions were alarmed at the scandalous methodology and conclusions of Tierney’s book. These included the National Academy of Sciences, the American Society of Human Genetics, the International Genetics Epidemiology Society, the Society for Visual Anthropology, and the University of Michigan. In contrast to the AAA board, the voting membership of the organization passed two referenda in 2003 and 2005 by overwhelming margins, condemning the misrepresentation of the 1968 epidemic, criticizing Tierney and his academic supporters, and calling for a complete rescission of the acceptance of the task force report.

Defenders of AAA’s action talk in terms of the legitimacy of exploring ethical issues in anthropological fieldwork such as informed consent, the effects of gift giving, and the representation of vulnerable subjects. They speak of the inquiry into Chagnon and Neel’s work as in the defense of the credibility of American anthropology. Detractors blast the group for taking seriously the work of an uncredentialed journalist whose major claims had already been shown at the outset to be false instead of protecting serious investigators’ right to be fairly represented in the public spotlight and failing to give them a formal invitation to defend themselves in the process of wrecking their reputations.

Despite the membership vote in 2005 to withdraw acceptance of the task force report, the AAA left the report on its website until 2009 when legal action on behalf of Chagnon finally forced them to remove it. Chagnon’s work as “the last of the great ethnographers” was celebrated in an Edge special event convened by Steven Pinker, Daniel Dennett, Richard Dawkins, John Brockman, and other intellectual luminaries.