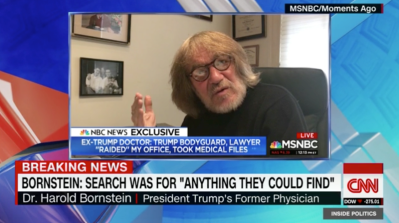 ‘Dr. Harold Bornstein, Donald Trump’s personal doctor—not that one—has told CNN that Trump personally dictated the superfluous December 2015 letter which said Trump’s “physical strength and stamina are extraordinary” and that he would be the “healthiest individual ever elected to the presidency.”

“He dictated that whole letter. I didn’t write that letter,” Bornstein, who treated Trump dating back to 1980, told CNN. “I just made it up as I went along.” Bornstein also said that he was in a car with his wife in New York when Trump told him what he wanted to say, and compared the letter to Fargo:

“That’s black humor, that letter. That’s my sense of humor,” he said. “It’s like the movie ‘Fargo’: It takes the truth and moves it in a different direction.”…’