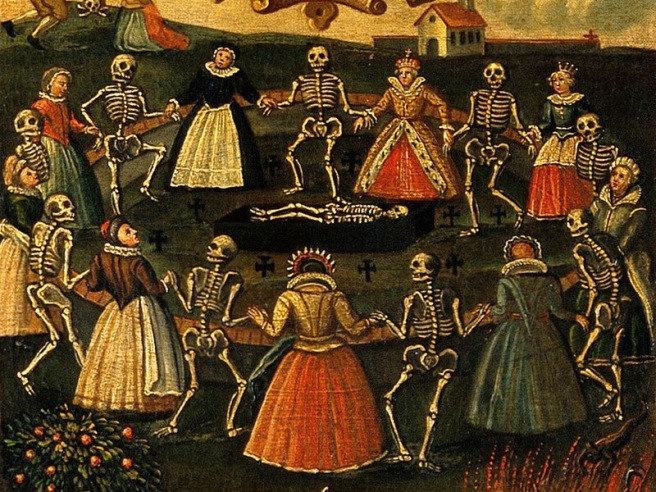 ‘In the Danse Macabre, or Dance of Death, skeletons escort living humans to their graves in a lively waltz. Kings, knights, and commoners alike join in, conveying that regardless of status, wealth, or accomplishments in life, death comes for everyone. At a time when outbreaks of the Black Death and seemingly endless battles between France and England in the Hundred Years’ War left thousands of people dead, macabre images like the Dance of Death were a way to confront the ever-present prospect of mortality.

Though a few earlier examples exist in literature, the first known visual Dance of Death comes from around 1424. It was a large fresco painted in the open arcade of the charnel house in Paris’s Cemetery of the Holy Innocents. Stretched across a long section of wall and visible from the open courtyard of the cemetery, the fresco depicted human figures (all male) accompanied by cavorting skeletons in a long procession. A verse inscribed on the wall below each of the living figures explained the person’s station in life, arranged in order of social status from pope and emperor to shepherd and farmer. Clothing and accessories, like the pope’s cross-shaped staff and robes, or the farmer’s hoe and simple tunic, also helped identify each person. …’

‘The cycles of chaos and rhetorical attacks that have been a hallmark of Donald Trump’s presidency reached another peak this week, forcing a rare public appearance Thursday by chief of staff John Kelly, who appeared before the White House press corps in a bid to smooth the waters. …’

A growing number of people both inside and outside the government are coming on board voicing the accumulating evidence, at least since election day if not long before, that the president is unhinged. In the Senate, Bob Corker says the White House is “an adult day care center” (insult as that that might be to most of the geriatric daycare patients I have known!)  and Ben Sass suggest that Trump’s actions indicate his inability to uphold his vow in his oath of office to protect the constitution. Increasingly, apologists for the president, such as the skunk Paul Ryan, hold their nose while repeating the  desperately outlandish assertion that this is just how a man acts when he is being unfairly criticized. (I hope, and think, that this puts the final nail in the coffin of Joseph Goebbels oft- quoted assertion that any lie repeated often enough becomes the truth.)

Routinely, members of his administration go on the record needing to contradict the assertions and intentions he has expressed in his deranged late-night tweets, and there’s no telling how many have decided in private not to follow his orders, should they cross some privately drawn line in the sand, such as launching a nuclear attack on North Korea. One can only hope for a mutiny by the relevant military personnel in such a case.

More than two dozen mental health clinicians of national stature, a number of them friends and colleagues of mine, have contributed to the book, The Dangerous Case of Donald Trump, which argues that Trump’s mental state is a clear and present danger to the welfare of the United States and its people and indeed makes him the “most dangerous man in the world”.

Preeminent psychiatrist Robert Jay Lifton, who studied the psychology of obedience to Nazi terror, warns of the “malignant normality” that can transform our everyday life if others do not join those who have already spoken up, as I try to do here in this weblog.

In the final chapter of the book, psychiatrists Dee Mosbacher and Nanette Gartrell summarize the stipulation that many of us have been making that Trump’s inability to distinguish fact from fiction, rageful responses to criticism, lack of impulse control, and wanton disregard for the rule of law indicate emotional impairment rather than deliberate choice. They conclude with the argument, which I find compelling, that we invoke the process embodied in the 25th Amendment to the U.S. Constitution, which addresses presidential disability and succession, to evaluate whether Trump is fit to serve. This is an increasingly more viable alternative to the impeachment process to get Trump out of office.

The process can be initiated by a request from Trump’s Cabinet members or self-started by Congress. An impartial panel of medical and psychiatric experts would be convened to evaluate Trump’s capacity to discharge his duties, conclusions remaining confidential unless they indicated that he should be removed from office. Let us hope that it is a race between the Cabinet and the Congress to reach such a conclusion. Call it fortunate or unfortunate as you may, Trump can be counted upon to provide a growing  impetus for such a process with his continuing erratic, bizarre, irrational, and outrageous behavior.