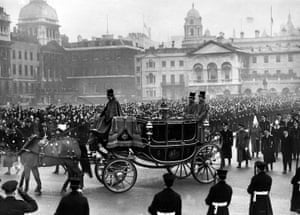 ‘The Queen is Britain’s last living link with our former greatness – the nation’s id, its problematic self-regard – which is still defined by our victory in the second world war. One leading historian, who like most people I interviewed for this article declined to be named, stressed that the farewell for this country’s longest-serving monarch will be magnificent. “Oh, she will get everything,” he said. “We were all told that the funeral of Churchill was the requiem for Britain as a great power. But actually it will really be over when she goes.” …’

In any case, if you hear Sabres of Paradise’s Haunted Dancehall playing on the radio, go to a news source immediately.