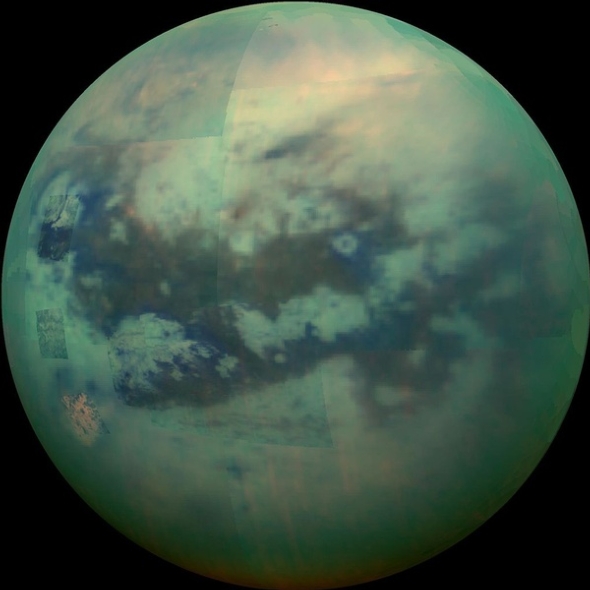 ‘…Titan is the only other body in the solar system with liquid on the surface, with its lakes of methane and ethane that look startlingly like water bodies on Earth. It rains methane on Titan, occasionally filling swamps. Dunes of solid hydrocarbons look remarkably like Earth’s sand dunes.

For protection from radiation, Titan has a nitrogen atmosphere 50 percent thicker than Earth’s. Saturn’s magnetosphere also provides shelter. On the surface, vast quantities of hydrocarbons in solid and liquid form lie ready to be used for energy. Although the atmosphere lacks oxygen, water ice just below the surface could be used to provide oxygen for breathing and to combust hydrocarbons as fuel.

It’s cold on Titan, at -180°C (-291°F), but thanks to its thick atmosphere, residents wouldn’t need pressure suits—just warm clothing and respirators. Housing could be made of plastic produced from the unlimited resources harvested on the surface, and could consist of domes inflated by warm oxygen and nitrogen. The ease of construction would allow huge indoor spaces.

Titanians (as we call them) wouldn’t have to spend all their time inside. The recreational opportunities on Titan are unique. For example, you could fly. The weak gravity—similar to the Moon’s—combined with the thick atmosphere would allow individuals to aviate with wings on their backs. If the wings fall off, no worry, landing will be easy. Terminal velocity on Titan is a tenth that found on the Earth…’