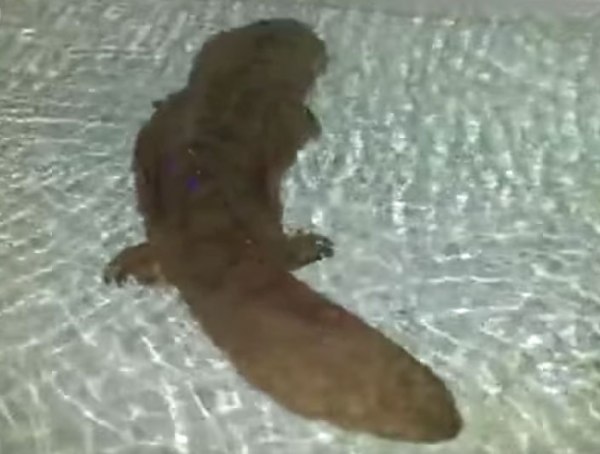 ‘If you’re ever wading through a river in China and step on something squishy, take care—you might be standing on Andrias davidianus, the largest amphibian on Earth.

This is exactly what Chinese media sources say happened last week when a fisherman discovered a Chinese giant salamander in a cave outside the city of Chongqing (map).The gentle giant weighs 114 pounds (53 kilograms) and stretches over 4.5 feet (1.4 meters) long, according to the Chinese state-run publication People’s Daily Online.

Believing the salamander to be ill, the fisherman contacted the authorities, which captured the animal and transferred it to a facility for “protection and further study.”  While some subsequent news reports cite anonymous experts claiming the animal may be more than two centuries old, these estimates are at odds with what scientists know about the species. “It is a big salamander, and they grow slowly,” says Theodore Papenfuss, a herpetologist and researcher at the University of California, Berkeley, “but the oldest I’ve heard of is 50 years, and that was in captivity.” ‘