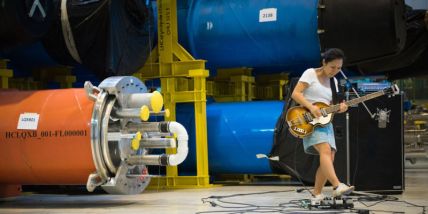 It’s normally just researchers that get to experiment at the LHC. But one physicist has decided to invite a series of bands to play around at the world’s largest science lab — and this is the result.

The first event of a new an initiative called Ex/Noise/CERN, that’s led by Dr. James Beacham, saw the experimental indie band Deerhoof set up their gear in CERN’s magnet test facility. In a press release, Beacham described what he was hoping to achieve:

“Musical curiosity is similar to scientific curiosity and, on a personal level, Deerhoof has inspired me as much as Einstein. They’re explorers and this sense of exploration is what you feel in the air at CERN right now, and so the pairing of Deerhoof and CERN was natural.”

This particular musical outing was in honour of the LHC’s recent ramp up to 13 TeV. The idea was to “draw inspiration from CERN physics and create impromptu musical arrangements amongst CERN equipment.”

The video below captures some of what happened during the day. It might not be melodic indie pop, but it is certainly interesting and exploratory kind of hard to understand, a bit like a musical version of what happens at CERN.