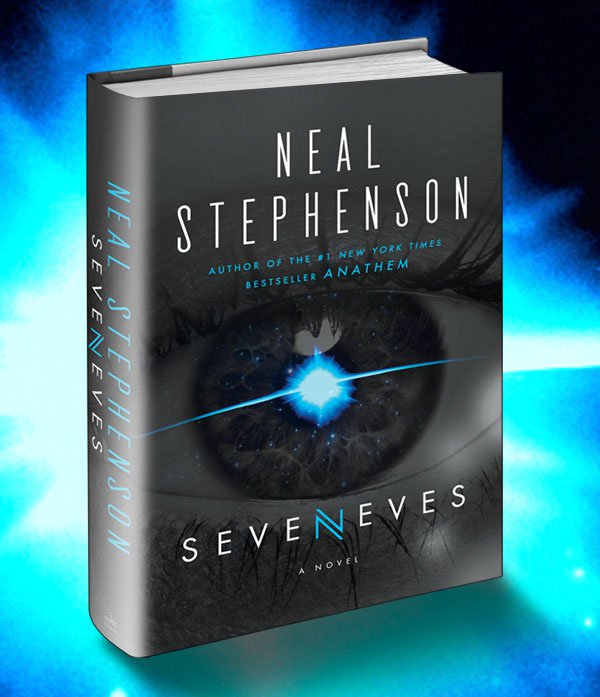 The end of the world is just the beginning in NEAL STEPHENSON’s new novel (via Boing Boing): ‘The #1 New York Times bestselling author, known for Anathem (the Locus Award winner for Best Science Fiction Novel that the New York Times called “immensely entertaining”) and Reamde (which Cory Doctorow called “a triumph” in these pages) strikes again with exactly the kind of complex and mind-altering epic you’d hope for.

SEVENEVES. (You say “seven eves” with no pause.)

The Hitchhiker’s Guide to the Galaxy was described as being about “the end of the world and the happy-go-lucky days that follow.” Well, these End Times aren’t as freewheeling, but they’re endlessly fascinating, stocked with characters and concepts that will immerse you completely in their fracturing world. (Prepare yourself with the GLOSSARY.)

The story: A catastrophic event renders the earth a ticking time bomb. In a feverish race against the inevitable, nations around the globe band together to devise an ambitious plan to ensure the survival of humanity far beyond our atmosphere, in outer space.

But the complexities and unpredictability of human nature coupled with unforeseen challenges and dangers threaten the intrepid pioneers, until only a handful of survivors remain . . .

Five thousand years later, their progeny—seven distinct races now three billion strong—embark on yet another audacious journey into the unknown . . . to an alien world utterly transformed by cataclysm and time: Earth.

A writer of dazzling genius and imaginative vision, Neal Stephenson combines science, philosophy, technology, psychology, and literature in a magnificent work of speculative fiction that offers a portrait of a future that is both extraordinary and eerily recognizable.

As he did in Anathem, Cryptonomicon, the Baroque Cycle, and Reamde, Stephenson explores some of our biggest ideas and perplexing challenges in a breathtaking saga that is daring, engrossing, and altogether brilliant….’