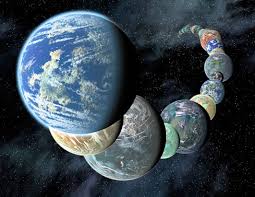 ‘NASA astronomers nearly doubled the number of alien worlds known to humanity on Wednesday, reporting the discovery of 715 planets located in nearby solar systems.

The discoveries bring the total number of known planets outside our solar system—so-called exoplanets—to roughly 1,700.

Launched in 2009, NASA’s $591 million Kepler Space Telescope has now discovered most of the planets orbiting nearby stars.

The newly announced exoplanets reinforce the view that most solar systems around sunlike stars have smaller-size planets.

Most of those planets range in width from Earth-size (on the smaller side) to Neptune-size (on the larger). That’s quite a change from the Jupiter-size planets that were often spotted orbiting nearby stars during the early planet searches that started in 1995.’ (National Geographic).