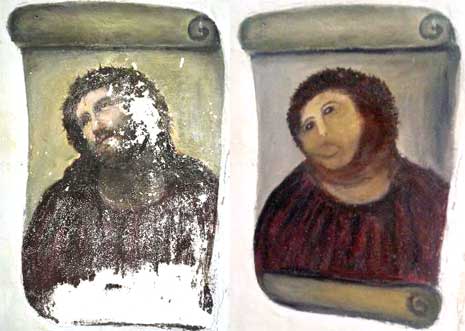 “An elderly woman stepped forward this week to claim responsibility for disfiguring a century-old “ecce homo” fresco of Jesus crowned with thorns, in Santuario de la Misericordia, a Roman Catholic church in Borja, near the city of Zaragoza.

Ecce homo, or behold the man, refers to an artistic motif that depicts Jesus, usually bound and with a crown of thorns, right before his crucifixion.

The woman, Cecilia Giménez, who is in her 80s, said on Spanish national television that she had tried to restore the fresco, which she called her favorite local representation of Jesus, because she was upset that parts of it had flaked off due to moisture on the church’s walls.

The authorities in Borja said they had suspected vandalism at first, but then determined that the shocking alterations had been made by an elderly parishioner. The authorities said she had acted on her own.

But Ms. Giménez later defended herself, saying she could not understand the uproar because she had worked in broad daylight and had tried to salvage the fresco with the approval of the local clergy. “The priest knew it,” she told Spanish television. “I’ve never tried to do anything hidden.”

Ms. Giménez said she had worked on the fresco using a 10-year-old picture of it, but she eventually left Jesus with a half-beard and, some say, a monkeylike appearance. The fresco’s botched restoration came to light this month when descendants of the 19th-century artist, Elías García Martínez, proposed making a donation toward its upkeep.

News of the disfiguring prompted Twitter users and bloggers to post parodies online inserting Ms. Giménez’s version of the fresco into other artworks. Some played on the simian appearance of the portrait.” (NYTimes)