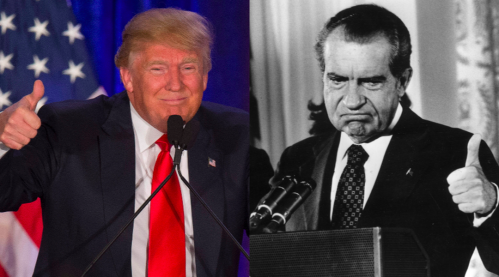 ‘During the 1968 election, Richard Nixon successfully ran as the candidate of law and order against a backdrop of rising crime and civil unrest. There was then, as there is now, a very unsubtle racial element at play in the statement. In ’68, Nixon plastered Americans’ TVs with images of protests and urban upheaval, urging the nation to “vote like your whole world depended on it.”

Today, Trump vows that without his guidance regarding Hispanic immigrants, Muslims, and the “threat” of Black Lives Matter, “we will cease to have a country.

“That’s because “law and order” in American politics has always been a dog whistle — a way of speaking in code to one group of Americans to exploit their fears regarding another.

But it’s not just racist posturing. Appealing to white America’s anxieties about black crime was more than smart election strategy for Nixon — it ended up shaping the criminal justice policies of both his administration and the ones that followed. The result was an unprecedented explosion in incarceration and aggressive community policing that continues to disproportionately target people of color…’